The Use of Bypass and Anvil Secateurs for Pruning

There are two types of pruning secateurs: bypass and anvil. This is an explanation of the pros and cons of each type, when you should be using them and why.

There are two types of pruning secateurs: bypass and anvil. This is an explanation of the pros and cons of each type, when you should be using them and why.

At first glance there does not seem to be much of a difference between these tools, but the difference is significant.

Bypass secateurs work like scissors with two blades passing each other closely.

In most cases you will be pruning live plant material or wood that has recently died. When you use a bypass secateur correctly (see below), you will do almost no damage to the plant stems or branches that are left.

Anvil secateurs work like a knife where a blade is pushed through the plant material onto a cutting board, i.e., the anvil. How to Use Secateurs

The secateurs should be held so that only the blade touches the wood or stem that will be left on the plant. This means that you might need to turn your hand depending on your relative position to the bud, or to move around to the other side of the plant. If you follow this rule, you will cause little damage to the plant. Create clean cuts that slope to run rainwater off the cut and to the outside of the plant. The ideal slope of a cut on a vertical stem would be 20-30°.

The diagram below shows the proper way to hold the secateur to cut off a branch from the trunk. 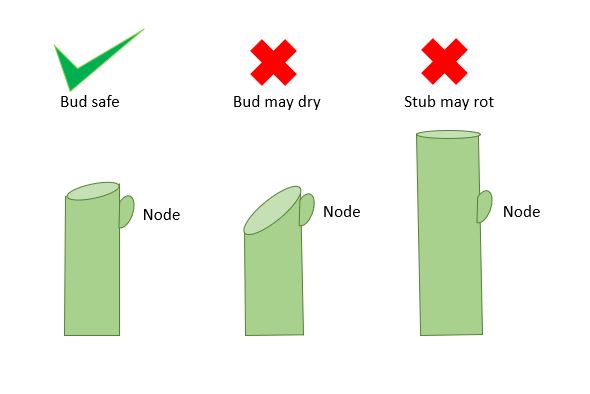 Late winter is pruning time for most trees, shrubs and other plants that benefit from pruning. Examples are fruit t...

How to Prune Roses

How to Prune Roses

Winter is the time to prune and protect your roses* in preparation for getting the best display from them this summ...