Pest wasps aren't just annoying - if you are unlucky, you might end up with a painful reminder that wasps pack a venomous, and to some, a dangerous sting. But in New Zealand that is not all that is bad about wasps; they are non-native introduced species that have detrimental effects on our native wildlife. The combination of nuisance, pain and environmental damage makes wasps many people's least favourite creatures.

Pest wasps aren't just annoying - if you are unlucky, you might end up with a painful reminder that wasps pack a venomous, and to some, a dangerous sting. But in New Zealand that is not all that is bad about wasps; they are non-native introduced species that have detrimental effects on our native wildlife. The combination of nuisance, pain and environmental damage makes wasps many people's least favourite creatures.

At this point I should clarify that we are not talking about all wasps in New Zealand, I am referring to the introduced social wasps; common wasps, German wasps and three species of paper wasps. There are many native wasp species that are an important part of the natural New Zealand ecology. Most native wasps are solitary, some are tiny (a few species practically microscopic), none of these bothers us and most are overlooked.

The pest social wasps have fascinating lives, they are extremely important in their native environments of Europe and North America, and face problems like those of their cherished, but often no less annoying, cousins the bees.

Pest social wasps live in colonies consisting of hundreds or thousands of sterile female workers and their much larger egg-laying queen who is the mother of the whole colony. 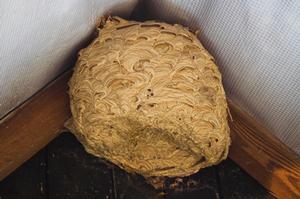 Social wasp nests are constructed from wood fibres collected, chewed and then mixed with water by the hard-working wasp workers to make a kind of papier maché.  The nests are started in late spring when queen wasps emerge from hibernation. The first small nest is of just a few cells in a golf ball-sized nest, or in the case of paper wasps a few open cells. The queen rears the first set of workers by herself before the first batch of worker wasps can start to take over the work required by the developing colony.

Once she has a few workers to collect food, rear new young and protect and maintain the nest, the queen settles down to producing eggs and using her pheromones to communicate with and control her workers. The colony grows throughout summer and into autumn. Once large enough, the workers start to give some young larvae larger quantities of food, causing the development of potential queens rather than workers. Male wasps develop from unfertilised eggs and take no part in the social life of the colony.

The potential queens mate with males from other colonies before overwintering and starting their own colony the next spring.

In their native lands, the social wasps are important predators and pollinators. When the colony is raising young they will feed on protein in the form of other insects such as flies and caterpillars. The larvae convert their protein-rich diet into carbohydrates that they secrete as a sugary droplet of honeydew to feed the adults. In late summer and autumn, with no larvae left, the adult wasps must find other sources of sugar and they are attracted to other sugar sources such as our sugar-rich foods and drinks.

In New Zealand, the wasps find huge quantities of honeydew in our native forests produced by sap-sucking scale insects. This energy-rich food would normally provide food for native birds, bats, insects and lizards. Wasps out-compete these native creatures for this rich resource putting pressure on the natives to survive.

In consequence, the ready availability of this food source and the lack of predators in New Zealand means that social wasp numbers reach very high numbers. The highest wasp densities in the world are found in New Zealand; in some beech forests, there are an estimated 12 nests, or 10,000 worker wasps, per hectare.

It is also the case that the honey industry is very important to New Zealand and wasps attack beehives and steal their honey costing the industry an estimated $9 million. The total cost of wasps to the New Zealand economy as a whole has been estimated at $130 million annually.

The pest social wasps are a nuisance to humans everywhere but in their native ecosystems, as well as having fascinating lives, they are extremely important in the environment: not so in New Zealand. It is hard to find anything of benefit from these wasps when they are in New Zealand.

If you find a wasp nest you will be doing yourself and the environment a favour by destroying it with NO Wasp Eliminator. Even if you don't find their nest you might find then chewing on your wooden fence or deck, in which case a spray with NO Wasps Total Protection will deter them and keep numbers down so that you can enjoy your garden in peace.

Protect Yourself and Your Family When Camping

Protect Yourself and Your Family When Camping

Camping in New Zealand is a wonderful, and largely safe, way to holiday and see the country’s iconic natural beauty...

Most Vespulid* wasp nests die off in late autumn after the queens and drones (males) have been produced.

New Zealand does not have many stinging and biting bugs compared to Australia but there are some insects and spider...

Pest Control Product of the Month

Pest Control Product of the Month

February 2020 NO Wasps Eliminator Wasp populations have been growing through the summer and we are now well into th...